WIN $500 worth of Lowrance product!

Planning to hit the water this 4th of July weekend? Start mapping your favorite body of water and you could be well on your way to winning $500 worth of product from Lowrance!

The first person to upload 1,776 acres of public sonar-log data to Insight Genesis between now and July 15th will win a $500-value prize package from Lowrance. Spend that five-hundy on Lowrance accessories, or put it towards the purchase of an upgraded or second sonar unit. Hit the water on the 4th, and you’ll get a good start in the contest! 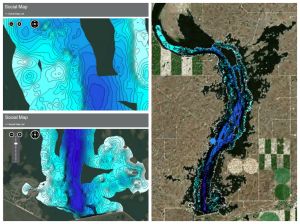 To look at the Insight Genesis Social Map chart of Crawling Valley Reservoir, a 6,000-plus-acre impoundment west of Calgary, Alberta, you’d think a fleet of survey boats must have covered all that water, unlocking the secrets of so much bottom structure.

Actually, it was just three guys – three Canadian fishermen, who, between them, logged sonar data on almost 100 separate fishing trips on the sprawling reservoir, which is known for numerous hazardous, shallow, rocky areas (good areas to be shown on maps!).

“The existing lake maps in Canada are terrible – non-existent practically, so these anglers are really pioneers,” Johnson says. “They’re leading the way, and others will follow. I don’t doubt this reservoir will be completely mapped soon. Just by going fishing, these anglers are improving the future of Canadian fishing. And not just for themselves, but for countless others in the Lowrance community that use Insight Genesis Social Map.”