(English) Get our FREE Fishing App for iPhone or Android!

How to download a FREE Insight Genesis Social Map chart for fishing, cruising or sailing

How to use multiple Insight Genesis maps on your sonar/GPS unit (new feature!)

Setting custom-colored depth ranges makes it easier to use Insight Genesis charts of coastal and other deeper waters. This article will teach you how.

By default, Insight Genesis maps shade deeper water dark blue and shallow water lighter blue. In most use cases – especially in fresh water – this default depth shading works fantastic for anglers and other boaters. In coastal waters, fjords and extremely deep reservoirs, however, the palette of blue shading is often spread so thin between the deepest water and the shallowest water that the shallower areas of interest to anglers and other boaters are often shaded a seemingly monochromatic pale blue, to almost white-looking, across a wide depth range — as shown in the image below. (Article continues below image)

To assist anglers and other boaters interested in depth ranges similar to those shown in the image above, GoFree recently released a software upgrade that enables Premium Insight Genesis subscribers to select and set custom color palettes to highlight multiple, custom depth ranges on the Insight Genesis maps they use on their compatible Lowrance HDS and Simrad sonar/GPS units.* After applying custom depth shading to the map shown in the image above, it looks like the image below. (Article continues below image). 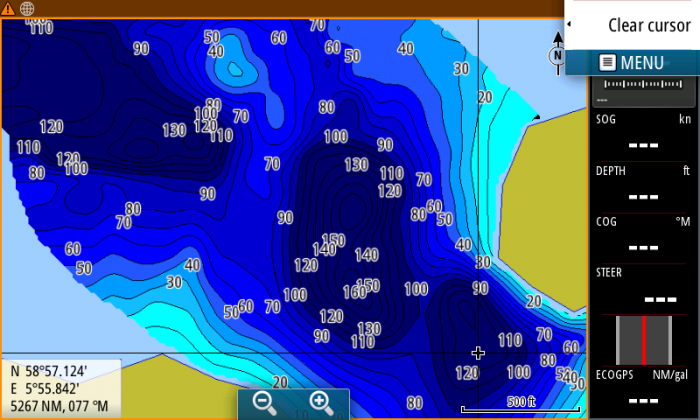 We created the custom color palette depth shading shown above by following steps similar to these below: